The Slow and Painful Death of Traditional Weight-Training 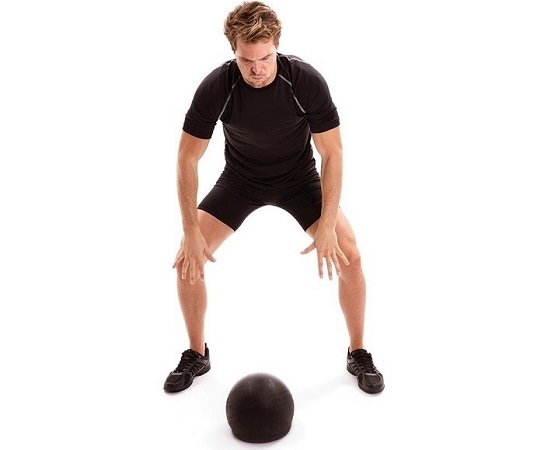 Bouncy Balls and Rubber Bands: The Slow and Painful Death of Traditional Weight-Training

Is traditional weight-training on the decline?  Next time you go to your local gym, stop for a second…take a look around you. Assuming you aren’t at a specialty gym or one of those dungeons Branch Warren’s training videos are filmed in, you’ll see what I see: a middle-aged man perched atop a bosu, his sinewy legs quivering as he curls a 5lb dumbbell with his right arm and presses a pink kettlebell with the left. Just behind him stands one of the few guys in the entire gym who looks like he has lifted weights, except the only thing he is lifting is his pen as he scribbles something down on a clipboard. Exhibits A and B: client and trainer. Horrified, you shield your eyes and turn away from the bizarre dance the middle-aged man is performing only to be confronted by an even more unsettling sight: a young woman – her back draped over the contours of a giant bouncy ball – performing some bastardized iteration of the hammer curl with big, stretchy rubber bands. She, too, is accompanied by a trainer scribbling data onto a template printout.

In some ways the modern gym more resembles a laboratory than a sanctuary for muscle-building. The trainers are like scientists, walking around with their clipboards while their clients test the newest concoction of bouncy balls, rubber bands, kettlebells, and foam rollers. I can’t tell you the last time I saw a client perform a barbell bench press or a squat with something that you don’t cradle in your arms like a newborn. You might say it’s just a phase, but this phenomenon has been slowly creeping into existence over the past ten years. It’s a new paradigm, and it’s slowly pushing traditional weight-training aside.

The Unbalance of the New Balance

I’ve speculated a lot about the origins of this phenomenon. When I studied for the NASM certification, I couldn’t help but notice the peculiarly strong emphasis the study materials placed on “balance”. It was as if the NASM thought that all of the clients in the world wanted to have “good balance”, nothing else. The problem is, “balance” in this context was supposed to be a precursor to traditional weight-training – but it seems clients never get to that stage. Maybe it’s not wholly the trainers’ education that has produced this trend, but the prospect that it is safer and therefore more desirable. But that doesn’t make sense either; I’d venture to say that juggling kettlebells while jump-roping back and forth on two bouncy balls is exponentially more dangerous than the controlled and predictable deadlift.

While I’m certain that the cause for all of this is a combination of an infinite amount of reasons, I always fall back on a simple, more viable conclusion: people like these exercises because they don’t make any sense. That’s right – these types of exercises look complex and new and exhilarating. To the neophyte client, all of these gizmos and gadgets look like a progressive, cool way to exercise. What ends up happening is this mentality that found root in clients begins to permeate all of gym culture. Next thing you know, these same clients come to the gym with a friend and have them sliding around on a foam roller, flailing jump-ropes around like tentacles. Suddenly, you can’t use the squat rack anymore because it’s become a jungle of dangling rubber bands.

Still, I have to consider the possibility that none of this matters to you. You probably understand the benefits of traditional weight-training and ignore all of these people and stick to what has been proven to work. Or perhaps you are luckier than I, and you are a member of a bodybuilding or otherwise specialized gym. In that case, you don’t have to deal with this stuff at all. Why should you care, right? Well, aside from serving as a concise example of something terminally wrong with society (i.e. the willingness with which most people trade the practical and useful for the new and trendy), this asinine trend marks the death of one of bodybuilding’s last connections to the rest of the world: the way people train.

One thing you’ll notice if you look at the history of the contemporary gym is that it always had an inextricable connection to bodybuilding and traditional weight-training. The gym used to be the bodybuilder’s domain; everyone else was a tourist exploring this esoteric world where bodybuilding culture flourished and competitors convened to train and socialize. If you read Arnold’s cleverly crafted autobiography, there are plenty of anecdotes that illuminate this. He even talks about how bodybuilders had to make weight-training appeal to the masses so they could support their own lifestyles. A bunch of broke bodybuilders weren’t going to keep a gym running, right? The gym was a gift that bodybuilding gave to the rest of the world. And nowadays, a gym is a place where you might get lucky and spot a bodybuilder (I imagine it’s abundantly clear at this point that I’m talking about the average gym and not Metroflex). In fact, bodybuilders aren’t even welcome in a lot of gyms. Despite all of this, for the longest time we still had claim to the origins of what everyone was doing: lifting weights. And now lifting weights has been supplanted by a strange, fetishistic attraction to bouncy balls and rubber bands.

When you think about it, the sport also played an integral role in the rise of the supplement industry, and now most of the people who use protein powder think only of the candy bar when they hear the name “Phil Heath”. All of this plays into the over-arching theme of bodybuilders’ criminally pathetic salaries and being systematically disowned by their own organizations (ever heard of the IFBB?). It never ceases to fascinate me how people can appropriate things from our sport and its culture– our training principles, our nutritional expertise, our supplements – only to turn around and scoff at what to them is just “a bunch of weird guys in speedos”. But hey – after all – to me they’re just a bunch of weird people with bouncy balls and rubber bands.