Should You Compete in a Bikini Competition?

What it Really Takes to Compete in a Bikini Competition 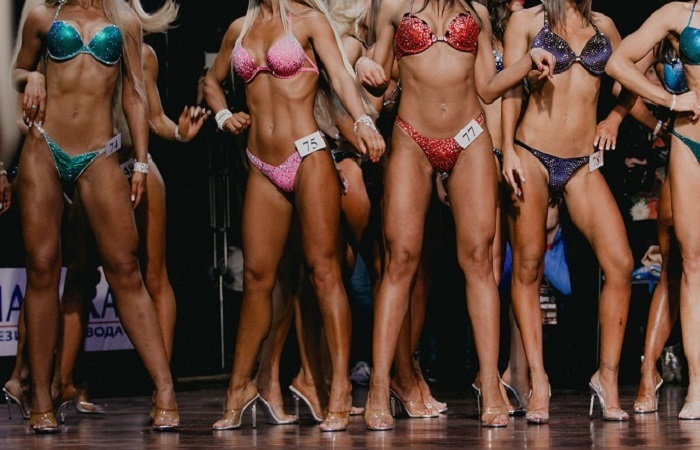 Do you want to compete in a bikini competition, but you are are lost and confused on where to start?  The bikini division is rapidly growing.  More and more contestants are pouring in, making bodybuilding competitions huge in numbers these days.  The bikini division outnumbers any other category.  So the question is, why is the bikini division so huge? It’s because it’s pretty much an easy victory when you compare it to the other divisions due to the physique requirements.

While the real athletic gal will use precision dieting, weight training, and intense cardio to take the stage, the other percentage looks like they prepped on liposuction, street drugs, and their boyfriend’s vitamins.

A girl with good genetics working at Hooters or a bar can easily promote herself as a fitness expert or prep coach, never having done either.  People look at her physique and assume that she has all the fitness answers.  So, while girls with God-given genetics will easily take the top placements, it’s a slap in the face to true competitors who do the grunt work of dieting and training.

The ugly truth is that many of the bikini competitors have been plucked from a bars or even poles.  Offended yet?  Get over it.  It’s about judging you in a bikini, so toughen up.  Some sleazy coaches and trainers go to bars to recruit bikini competitors.  Why not?  Women working in bars and night clubs have shapely and even fit bodies.  That’s why they work there, because they can.  Their body is their selling point.

Years ago, bodybuilding competition promoters didn’t make much money, if any at all, putting on a contest.  They had to rely on a top tier professional bodybuilders to guest pose to even clear a few bucks.  This struggle had been going on for decades.  The International Federation of Bodybuilding (IFBB) decided to introduce Figure to draw in more female competitors.  That was the beginning of the snowball effect to what the competitions have grown into.

The IFBB figured out how to make money, hence bikini, men’s physique, classic physique, etc.  Now, many of the competitions give awards to coaches and gyms who bring the most competitors to the stage.  So, what do coaches do?  They go to bars and cherry pick girls who would do well in competitions.

In the end, you have narrow-minded coaches putting woman on stage who have no business being in a bodybuilding competition.  It’s all marketing these days.  Next thing you know, a girl with zero knowledge about dieting or training is charging you big bucks for a meal plan.  Why?  Because most newbies look at the outer shell, assuming the person knows it all when most of the time the bikini competitor was coached herself.  All the did was follow a program outlined by her coach.  She doesn’t’ have the knowledge or background experience to create meal plans.

But yet, with the power of Instagram, anyone can be or do anything.  If you are going to Instagram for your fitness advice, you are setting yourself up for failure.  That’s where fitness goes to die.

There’s nothing wrong if a woman working in a bar wants to compete in a bikini competition.  However, SHE needs to have the primary interest in it.  She has to want to have the firm and tight body created via dieting and training.  She’s the kind of competitor the audience and judges want to see, not pimped out chicks so only a big-ego coach can make a buck or rank for himself.

The added competitors that don’t even meet the standards only slows the pace of the show.  It aggravates the expediters backstage, irritates the real competitors, tires the judges, and bores the audience.

If you don’t have a real interested in competing in bikini and being competitive for yourself, don’t get involved.  Competitions are for athletes who want to push their physiques beyond the norm and get award for their real interest and effort.

Are You Ready to Compete in a Bikini Competition?

If you are a real competitor and want to take part in a bikini competition, you need to check out my FREE Contest Prep Course below.  It’s the guide that can take you from square do your goal.  See below how you can become a competitor and place in the top 3.

Let's see what you are made of and see if you can get your body fat down to competition condition.  Grab the free course below.