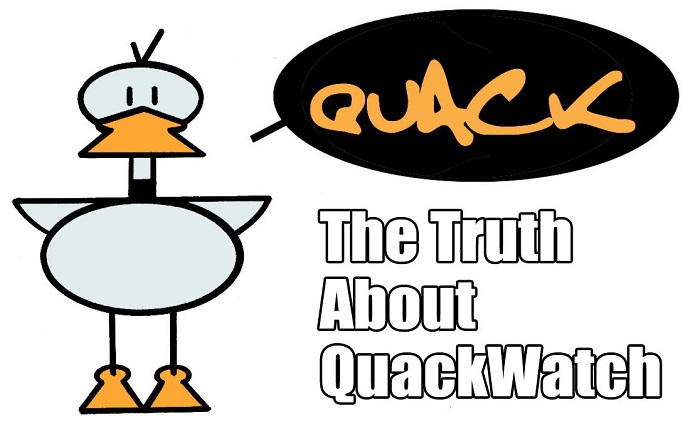 The Truth About QuackBusters and QuckPot Watch

Opinion by Consumer Advocate Tim Bolen I’ve been following the activities of the “Quackbusters” for about five years, ever since the name Stephen Barrett came up, as a player, against a client of mine in California. I asked the question “why would this group be using a doctor from Pennsylvania, as their witness, when there are 300,000 health professionals in this State?”

Thus began my education. Now I’m going to educate YOU…

The “Quackbuster” operation is a conspiracy. It is a propaganda enterprise, one part crackpot, two parts evil. It’s sole purpose is to discredit, and suppress, in an “anything goes” attack mode, what is wrongfully named “Alternative Medicine.” It has declared war on reality. The conspirators are acting in the interests of, and are being paid, directly and indirectly, by the “conventional” medical-industrial complex.

Millions of health freedom fighters, and members of the public, worldwide, know what I know. Public outrage and reaction is growing. After 25 years of unopposed success, the “Quackbusters” are now in real trouble… “The end” for them, has begun. They, themselves are being hunted.

The “Quackbuster Conspiracy” is in a desperate place now. They know they’ve lost the war, and are going to pay a terrible price for their actions. The fear is in their eyes…

Yes. When the self-named “Quackbusters” stumbled around to find a derisive name to call their victims, they picked the word “Quack,” without ever bothering to discover it’s origins. Its original meaning, from Europe, comes from the term “quacksalver” which was used to describe Dentists who were dumb enough to use mercury (a poison) as fillings for teeth. Look at propagandist, and “Quackbuster” king-pin, Stephen Barrett’s website (www.quackwatch.com), and you’ll find that HE IS IN FAVOR of mercury (amalgam) tooth fillings. Barrett, his cronies, and minions, are not known to do intelligent research.

Yes. The “Quackbuster Conspiracy” was started shortly after the American Medical Association (AMA) lost the court battle to the Chiropractors in a case begun in Federal court in 1976. The Federal judge ordered the AMA’s covert operation shut down – and leave the Chiropractors alone. The AMA files, library, etc., ended up in Stephen Barrett’s 1,800 square foot basement in Allentown, PA. Barrett, and his minions, had the common sense to stay away from criticizing Chiropractors for quite some time. Barrett has since abandoned that common sense.

Federal judges have a way of enforcing their decisions using shackles, Federal Marshals, the federal prison facilities, asset seizure, etc… Even Barrett, in all his incredible arrogance, isn’t dumb enough to match wills with a Federal Judge. I think the Chiropractic Association should consider re-opening the Wilks case in front of that same Federal Judge – and point right at Barrett, and his cronies.

In that early, educational case for me in California, Stephen Barrett and two slime-ball investigators from the California Medical Board, had convinced members of the Laguna Beach Police Department that a nutritionist using ozone therapy was “a sex criminal preying on women.” Flak-jacketed thugs screwed a gun into Salvatore D’Onofrio’s ear, forced him to lie on the ground, and thus began a brutal, anything goes, persecution.

D’Onofrio’s attorney was a hiking partner of mine, and told me the story on a ridgeline, seven miles up from a trailhead. I laugh now when I remember my naive response “This can’t be happening in America.”

Sal D’Onofrio, through his attorney, hired us, at day 43 in solitary confinement in the Orange County Jail. He was in “solitary” because that’s what they do with sex criminals. He was in jail because the judge had set bail at $500,000, an amount his supporters couldn’t raise. Barrett’s minions were ruining D’Onofrio’s life in the press.

We organized a bail hearing for day 48 of incarceration, put 62 of D’Onofrio’s supporters in the courtroom, LA network television in the jury box, got the front page of the LA Times, etc., etc., etc., – and the judge let D’Onofrio out on his own recognizance. Seven weeks later the prosecutor dropped the charges.

Who are these people that would, so casually, inflict that kind of nightmare on an innocent man?

“Alternative Medicine” is defined as any protocol, action, or therapy that isn’t “drugs, radiation, or surgery oriented.”

North Americans have overwhelmingly (by their purchases) made “Alternative Medicine” the “health choice of the people” – for the best of reasons: it works better than allopathic, it “removes the cause” rather than “treating the symptoms,” it is cost effective, it makes people feel better and think clearer, and it doesn’t have all those horrible effects, and side effects, of invasive surgery or prescription drugs.

More than half of the US health dollar in 1999 was spent on “Alternative Medicine” and it was all out-of-pocket. Conventional medicine is being paid for, and is surviving, only because insurance and Medicare pay for it – the public won’t spend an out-of-pocket nickel on it.

The door to real “alternatives” is barely open. The future of medicine is right in front of us – it isn’t in pharmaceuticals – it is in nutrition, body cleansing, prevention, oxygen therapies and energy medicine – all of which are constantly targeted by the sleaziest of the “Quackbuster” soldiers.

The “Quackbusters” use the FSMB to persecute two groups (1) “Alternative Practitioners” within the MD ranks (they treat them like traitors), and (2) non-licensed alternative health professionals (they charge them with “practicing medicine without a license”).

The “Quackbusters” through the FSMB, have been able to change the focus of prosecutions against “bad doctors.” They define “bad doctors” as those that use alternative modalities – and maximum penalties are exacted. We have seen in California, that real “bad doctors,” those that kill their patients, actually get off with a slap-on-the-hand by using the defense “but I prescribed a lot of drugs.” State medical Boards are not serving the needs of “we the people,” they are serving the needs of the “Quackbusters,” and their paymasters.

Medical Board prosecutions are funded by the States – Barrett, and his slime artists, don’t have to spend a dime… I couldn’t even count the number of “alternative medicine” practitioners currently under persecution from mis-informed Medical Board investigators and prosecutors. The damage done to Americans from this attack is incalculable…

BARRETT’S DUBIOUS CLAIMS ABOUT WHAT “HEALTH FRAUD” REALLY IS…

The US government has indicated that “Health Fraud” is a major problem in the United States Health Care system. Statistics show that “conventional medicine” rips off the American public significantly each year in bogus billings, false claims, unnecessary procedures and tests, etc…

But, if you peruse Stephen Barrett’s (don’t call him doctor, he’s not licensed) website, you get the impression that “allopaths” are to be classified somewhere next to archangels – and “alternatives” are snake-oil salesmen, akin to the devil’s minions. Barrett clearly defines, in smirky arrogance, health fraud as “alternative medicine.”

Doesn’t Barrett read national statistics on health fraud? Of course he does – he just ignores them. And “Barrett’s parrots” at the FSMB mimic their supreme commander’s every word in their policy statements. Anyone can read FSMB policy statements, in their entirety, on the web. Just go to www.fsmb.org and start reading. They, like Barrett, define “health fraud” as “alternative medicine,” and fail to even mention the real national “health fraud” statistics.

WHY THE FEAR IN THEIR EYES?

(1). EXPOSURE – Health Freedom Fighters, tired of the persecutions, and outnumbering the “Quackbusters” 100,000 to 1, are now watching Barrett and his soldiers carefully. They’ve decided to put a stop to Barrett and company. Lists are being made of who the “Quackbuster Conspirators” are, what their function is, where they fit into the conspiracy, who they work for, who their associates are, where they live, and what their probable motives are. Their daily activities, as “Quackbusters,” are being monitored, and documented.

Health leaders consider Barrett, and company, to be running a subversive organization working against the interests of America.

(2). RIDICULE – Examination of Barrett’s operation proves that the “Quackbusters” are a paper tiger. They are a construction with a 25 year old modus operandi. Their membership is small, they have an even smaller core group, the industry is turning its back on their extremism, and their leadership “public presence” is laughable. Their support network could best be described as “pea-brained.”

Their “annual meeting” for the conspiracy was held in a Super 8 motel in Missouri – 25 stalwarts attended from, at least, six different plotter groups. Not very impressive.

“Bizarre” Stephen Barrett, his cronies and minions, even labeled two time Nobel Prize Winner Linus Pauling as a “Quack.” The American public, in a consumer-driven movement, is rejecting, with laughter and ridicule, Barrett and company’s ludicrous assertions – hence the term “Quackpot” is now used, commonly, to describe the self-named “Quackbusters.”

(3). PUBLIC RAGE – The American public is just now realizing two things (a) that a good many of those “alternative” things being blocked, and suppressed, have been around for a long while – but not available to them because of the conspiracy, and (b) that the system to find and put new things in place is corrupt – and works against Americans. Every “cure” since polio has been suppressed, and the proponents of those cures, reviled by the “Quackbuster Conspirators.”

Barrett, his cronies, minions, and henchmen, have every reason to fear public rage. Russian leader Nikita Khrushchev said it best. He said, “We would never invade America. For every American has a gun…”

“You mean my mother didn’t have to die that horribly, or even die at all?” is a question more, and more Americans are asking… Dec