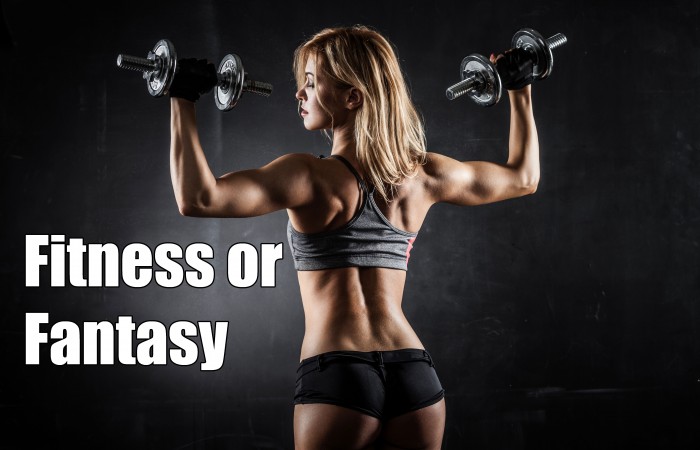 Fitness or fantasy is the question.  Women who compete in the various forms of fitness and strength contests are often expected to train hard and heavy for competition that requires functional strength and coordination. So why then, are they required to do bathing suits and (in some cases) evening gowns to be judged for physical appearance as well? Fitness contests are beginning to look like a beauty pageant gone horribly awry.

I have nothing against women who choose physique contests as a showcase for their lifting endeavors. Personally, knowing what I do about them it would not be my given path. Physique contests are devised to judge body parts against a conferred standard and strength actually has little or no bearing whatsoever on the final outcome. On the other hand, “fitness” contestants are required to excel in a multitude of events, many of which now created for reasons other than to showcase competition in strength or actual fitness.

That is not to say that the women who compete in fitness shows are not fit! The truth is, they are strong enough to devote up to (and often exceeding) six hours a day to their training! Many of the women are former gymnasts and dancers who have trained long and hard for skills specific to those activities. They are without a doubt, quite able to display athleticism far above and beyond the average female! My disappointment is with the means they have chosen for representing their capabilities to the public, and the confusion this message conveys concerning women of strength.

Some fitness productions have contestants compete in sincere physical endeavors that are judged fairly for speed, dexterity, and brute strength. This seems impartial and straightforward enough. However, promoters of several contests have devised a means of creating events that are more profitable and entertaining. In doing so, genuine fitness has become altogether removed from the equation and a mutated, gymnastic/dance exhibition has emerged in its place. The concept of these contests has evolved into a “show” and in the process, have caused the integrity of the event to degrade and lose its original purpose.

During the evening portion of a “fitness show” the contestants agility and strength is supposed to be judged during a brief, albeit elaborate program which must include routines that are more often than not professionally choreographed. There are mandatory elements which must be incorporated into the freestyle routine in addition to an assortment of splits, pushups and gymnastic or dance maneuvers. This routine is considered the “talent” portion of the contest, a term borrowed from the beauty pageant industry.

As much as I respect the contestants for their outstanding aerobic, dance and gymnastic capabilities, I have difficulty with the emphasis placed more upon the entertainment factor than fitness. I also can’t get beyond the increasingly outrageous costumes worn to accompany their music selection and routine. The use of props is common, and it is not unlikely that you might see a motorcycle on stage and a woman scantily clad in leather beside it. One fitness contestant danced her way around the stage dressed in a prim white blouse, white lace bobby socks and black mini skirt that rode up frequently to reveal white lacy panties. She was “pretending” to be a sexy school teacher.

These antics serve as nothing more than an overly theatrical form of expression that lends itself easily to the influence of soft core porn. The use of sexually suggestive drama has become so popular that it is not only encouraged but expected. Sex sells, which is increasingly obvious at fitness shows where women are rewarded for displaying their assets to manipulate their performance for the enhancement of male entertainment, not as a display of athleticism. Willingness to participate in this behavior implicitly delivers the message that sex and exploitation are acceptable vehicles for the promotion of fitness. In comparison, dancers who decide to alter dancing into striping may very well be talented dancers. The question is, by removing their clothes do they advance women in the dance industry? Should they be defined as dancers or strippers?

After the talent show, the contest deviates even further from fitness as the ladies return to the stage once again for the bathing suit round. Some fitness shows are not content to have the women appear in bikinis and stiletto heels, (a combination of attire that is completely nonfunctional) but may also require them to return garbed in a one piece bathing suit or in some cases, a revealing evening gown. The women do not pose as they would in a physique contest, they merely parade and turn before a hooting howling audience to see which set of headlights get the best response from the jeering crowd. The emphasis on physical strength is absent. Alarmingly, this twist begins to look very much like a cousin to the wet T-shirt contest which has become notoriously popular at Spring Break.

Thinking perhaps I am being too harsh in my assessment of fitness shows, I turned to the publication that represents these women to the public. Robert Kennedy’s fitness magazine Oxygen is the “voice” for fitness women world wide. When Oxygen covered the NPC USA 1999 Fitness Championship the strength element of the contest was so unimportant it was not even given a mention. The author went on to describe the “big winner” as having “long, lean legs and a well rounded rump, which gave her the points to take home the top spot.”

A writer covering the Panatta Pro Fitness Cup in Italy devoted a four sentence paragraph to cover the “raw power” displayed by the women in the rowing round. One of the sentences described the contestants vocal reactions to the ongoing event while another gave the finishing results. Although coined “the most grueling segment of the contest,” nothing was actually mentioned about the rowing! The author did proceed to cover the evening portion of the contest in lurid detail, describing one of the top three contestants as exhibiting “a series of sultry floor gyrations that would make any top gymnast flush” I would credit the authors of such titillating description, but the magazine did not publish the writers names. Perhaps the authors did not wish to be identified.

Must strong women prove that they are capable of functioning athletically through events that showcase them as eye candy as well? This display of sexism diminishes the purpose of strength and power and signifies a substantial leap backwards for women. Female lifters identify themselves with strength, not gender specific adjectives like charming, sexy, or attractive.

Women who work hard to be accepted for their strength achievements should not be expected to fit a mold that is not of their making. After all, departure from stereotypical expectations of our gender is often partially responsible for many women taking to iron in the first place! Therefore, it is a contradiction of our very beliefs and an insult to our identity to demand we must momentarily be something we are not.

If gymnasts and dancers want to display their lithe and lean bodies on stage, then remove strength from the equation and find a label that accurately describes their performance. Using strength as a guise to generate publicity is a misrepresentation of those who sincerely attempt to compete in non-subjective events. Can you imagine the Highland Games participants completing in an exhaustive strength program only to have it followed by a mandatory tuxedo, bathing suit or evening gown round of competition? If women are required to conform to such conflicting requirements then perhaps for the sake of equality we should demand the Worlds Strongest Men competitors be judged in a Speedo, bow tie and wingtips. Would male fitness competitors allow themselves to be humiliated by loosing a strength event based upon lack of charisma or poise? Strong men wouldn’t stand for such nonsense! I find it objectionable that strong women DO!

Those of us who train hard for TRUE measurable strength competition do not want to be expected to impersonate Barbie. We are proud of our abilities and do not wish to be restricted by our lack of marketable modeling potential or sex appeal. I implore promoters of female strength contests to develop honorable, challenging events where female athletes can compete with the dignity we deserve. There are many women who are strong, agile and interested in a fitness competition that will test strength and skills without requiring the benefit of a professional choreographer, silicone implants, a bathing suit or the need to perform a straddle V sit-hold in the face of a male judge. Somebody please present women with the opportunity to earn recognition through our actions, not our appearance!