Need a feminine iron check? I’m here to trash the ever-so-popular female bodybuilding myths and open the door to the truth.  Some of these myths may be old and others rather new.  Nevertheless, I’m going to spill the beans and tell you the truth about feminine iron and female bodybuilding because if you are misinformed repeatedly on a certain topic, you’ll begin to believe the fallacies.  It’s amazing how lies can actually implant themselves into your brain with no consent from you whatsoever! 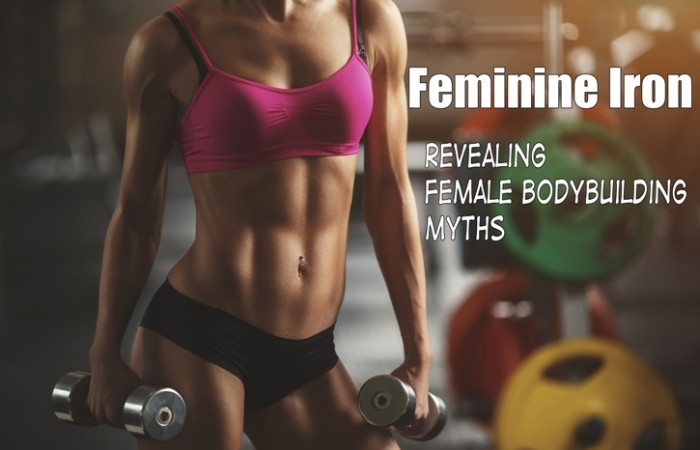 Female Bodybuilding Myth #1:
Women Who Workout With Weights Get Bulky

There’s a vile rumor circulating suggesting that women who weight train get bulky.  This outright LIE prevents many women from even walking into a gym. This myth causes most women to become cardio queens and they tend to overdo all forms of aerobics in order to stay lean.  In the end, they never get to their true desired fitness level or body shape.

Don’t get me wrong.  Machines and cables do have their place in a workout program.  They can build some muscle and give you a metabolic boost.  But, why stop at the 25% mark when you can train properly and get 100% out of your workout?

Oh yeah, fear of getting bulky.  Forget that.  As a female, you will never get HUGE and BULKY by weight training as long as your body is producing more estrogen than testosterone.  The ladies you see with huge muscles have trained and eaten specifically for that look, and it’s not an easy thing to do.  Not many women can attain that type of muscle mass because the ritual is so intense and precise.

As a woman you will only build so much muscle size and that’s it.  After that, you can only improve you muscle density. Unless you specifically eat and train for it, you will never pack on the mass you see on true female bodybuilders.  Don’t correlate the gym as an iron-clanking sweat box for men only.  Look beyond the brute and think of the benefits training provides.

I hate to be the bearer of bad news, but masculinity in women is a personal choice. Lifting weights can’t transform your genes or gender. This is just another form of labeling formed via fear and ignorance.

Feminine iron and female bodybuilding are simply applying nutritional and training sciences, not a gender change. Proper eating burns fat and training build lean muscle tissue. Sharon Stone, Madonna, and Janet Jackson have proved what women and weight training can do to the female physique. Anyone who disputes these ladies femininity is gravely mistaken and really must reevaluate their self before judging others.

Negative. Bodybuilding is the science of training the body from the inside out, and the art sculpting the physique with diet. Bodybuilders who adopt the organic lifestyle are some of the healthiest people around.

The idea that bodybuilding is unhealthy comes from detailed contest preparation we must go through for a show. The last few days before a bodybuilding contest are unhealthy, but that’s just a few days a year.  Eighty-five percent of the people walking around are overweight or obese.  That’s living unhealthy 365 days of a year.  Bodybuilders must maintain muscle mass and make weight to compete competitively.  Therefore, certain strategies take place the final week.  It’s no different when compared to other sports such as wrestlers and jockeys who must make weight.  Hence we forget about the starvation diets models live on 365 to stay underweight.

A bodybuilding contest is the art of illusion.  You would be amazed at how a bodybuilder looks once they dye their skin, apply oil, and stand under bright stage lights that create shadows.  It’s 100% different than what that person looks like backstage or in their living room.  A 115 pound girl on stage can appear to weigh 135 pounds or more.  It’s all an illusion and bodybuilders are the master of the art.

Oh how I wish that was true. That means I wouldn’t have to diet intensely for contests. If light weights and increased repetitions defined your physique, there would be a lot more women in the gym with detailed cuts.  Light poundage and a lot of reps build muscle endurance. Cardio and specific dieting sparks fat loss for the cut and defined look the competitors on stage have.

Often times, competitors will lighten their poundage when training for a competition.  This is because when you lose body fat, some muscle is lost too.  Over the course of 12 weeks of hardcore prep, an athlete can lose some strength.   This is usually when the competitor will lighten the weight load a little and engage in a few more reps.

Female Bodybuilding Myth #5:
If You Stop Lifting, Your Muscles Will Turn Into Fat

The fitness myths just keep getting worse and worse; muscle turns to fat.  Really?  Muscle and fat are two completely different tissues in the body and one can’t change into the other. If muscle could turn into fat, wouldn’t you think that fat could turn into muscle? I am deeply saddened that there’s no scientific proof in finding that fat can turn into muscle. If anyone could make it a possibility, they would be richer than Bill Gates.

The fact is, you can either reduce or increase your muscle mass and you can either reduce or increase your fat mass, but you cannot turn one into the other.  Dr. Gerard P. Varlotta, an associate professor of rehabilitation medicine at New York University notes, “Muscle and fat are two distinct tissues that never convert to the other.”  Your goal in fat loss and an increased metabolism should be to lose fat and increase lean muscle tissue.

Now, if you want to build sexy muscle, you really need to grab my free bodybuilding report below.  It’s helped many women build and sculpt their physiques.

Even though we assassinate these myths daily, one fact will remain the same. There will always be someone who believes at least one of them. That is why I think it is important to hit these myth busters time and time again, to keep the information fresh in your head and for you to understand that weight training and bodybuilding are healthy and they do reshape your body without all the negative side-effect that people simply make up. 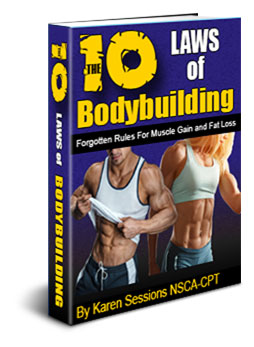