Difference Between Figure and Physique

What’s the Difference Between Figure and Physique, As Well As Bikini and Female Bodybuilding? 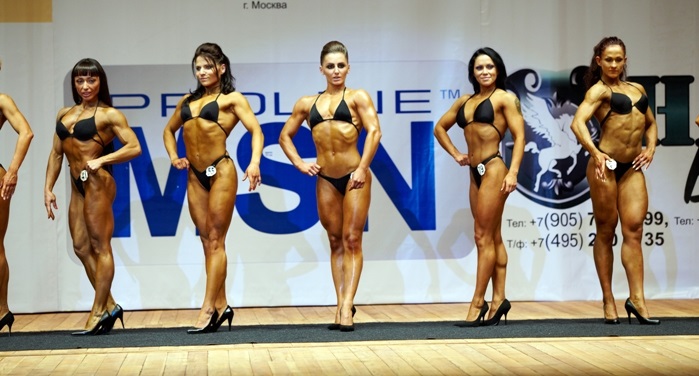 You are here because you want to know the difference between figure and physique.  You may have thought about entering one of those figure competitions, or maybe it was that bikini competition.  Wait, no, it was women’s physique.  Yes, I’m sure it was the women’s physique contest you want to enter.  There’s a female bodybuilding category too?  With so many fitness and physique categories to from how do you know which one to enter?  What’s the difference between figure and physique?

Now we’ve established that you do have a desire to compete in a show.  It’s now time to narrow things down and figure out which category is best for your interest.  Let’s start off where it ALL began and work down from there so you can get the whole picture. 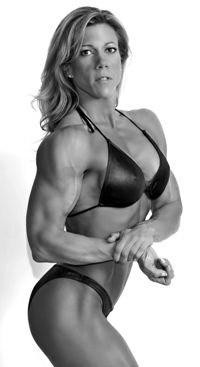 Female Bodybuilding scoring is on muscularity, proportion, and symmetry

By the time the late 1990s rolled around, female bodybuilders had perfected their sport.  The competition was so immense that only the best of the best could hold either own on stage.  Those who could fight the competitive battle could move up in ranks.  That was fairly hard to do in the 1980s and 1990s.

Female bodybuilders had to have a very competitive physique to enter a National Qualifier.  Only the perfect packages could make it to the Nationals to earn a professional status and pro card.  Some notable great female bodybuilders are Sue Price, Tonya Knight, Brenda Raganot, and Rozann Keyser.

Six years later, in 1984 fitness competitions hit the stage.  This category is a alternative to female bodybuilding.  It’s for the women who wanted to compete in the sport.  However, scoring is not on muscle mass and definition solely.  This group started as sort of a “fit” beauty contest for women.  Fitness competitors guidelines required them to display their physique doing quarter turns in posing suits.

To give proper attention, and to be engaging to the audience, the fitness competitors required to do a fitness performance to display athleticism.  More women with skilled dance and gymnastic backgrounds began entering the fitness contests, raising the athleticism bar.

Fitness Competitions are judged and scored on degree of athleticism, as well as build, appearance, and presentation.

The fitness competitions became highly competitive in the 1990s.  Only those with progressive flexibility movements (side-split, front-split, high kicks) and strength movements (one-arm push-up, straddle hold, leg extension hold) in a choreographed routine can command the stage.  Just as with female bodybuilding, the fitness competitions became very demanding and only the best of the best could survive.  Monica Brant was a top-ranked fitness competitor, as well as Lisa Cusmano (pictured above; photo compliments of HardFitness.com), Mia Finnegan, and Adela Garcia.

have in-depth muscle size or have to do a fitness routine.  A figure competitions allows for almost any women who works out and diets to some degree to compete on stage and even a chance to win a trophy.

Just as with fitness competitions, as the years passed the figure competitors grew more and more competitive.  Each year figure athletes build bigger muscles and get more defined.  This blurs the lines between the established categories of the figure division and women’s bodybuilding.

Figure Contests scoring is on a small degree of muscularity, separation, and appearance.

Over time this category has also become extremely competitive.  The small curvy figure ladies are getting more and more muscular with deeper cuts.  Due to this obvious competitive drive women have, another division (Bikini Contests) appeared to keep women entering the shows.

Some notable Figure Pros that have ranked well and have earned respect in the fitness community are Erin Stern, Jenny Lynn, and Larissa Reis.

getting as muscular as female bodybuilders, a new door had to be opened to keep women interested and entering the shows.

The striking difference in the bikini portion of the show is surprisingly, the contestants don’t need to have and shouldn’t have overly developed muscle mass or muscle definition.  This is direct specifications from the International Federation of Bodybuilding.  Having over developed muscles and striations in this division will count against you.

So what’s the category for?  Well, the bikini competition allows women to compete on the physique stage, but they are not required to have extreme muscle development, striations, or display any physical athleticism.  It could be a platform for the bikini competitor to test the competitive waters and see if she’d like to advance to Figure, Physique, or Female Bodybuilding.

Bikini Contests scoring is on balance and shape, and overall physical appearance

Due to the light judgment on this category, a hardcore bikini competition diet plan and extreme muscle building training is not necessary. A general fitness program for overall conditioning works well.  Cassie Smith at www.bodybuilding.com states, “The judges at bikini competitions aren’t looking for muscle density, so do 15-20 reps for toning and shaping.”

The basic requirements for the bikini portion of the show in judging are to simply look good in a bikini from structured dieting and training and pose to the corresponding guidelines.

General Comment from a woman that doesn’t know about the sport:  “You are obviously biased to the larger muscle divisions but to say the above is simply ignorant.”

Me: Muscle definition and hardcore dieting are ABSOLUTELY necessary to even be considered as a legitimate competitor. You seem to be mistaking an actual “bikini” contest held during spring break with a competition bikini contest. Make no mistake, there is a HUGE difference! The only requirement to “look good in a bikini!” Alisha Biehn Joyner   Thanks for your misguided insight.  You might want to take a look at the Bikini Rules posted by the IFBB [PDF].  (See page 4, Article 134, #2)  I do my homework shweetheart.

Having muscle development or muscle definition in this category can place you at the bottom of the totem pole as stated by the IFBB in Bikini Rules, Article 134.

I took the liberty of providing the BIKINI RULES PDF above, and below is screen capture of Article 134… Just to show my “biased opinion”… 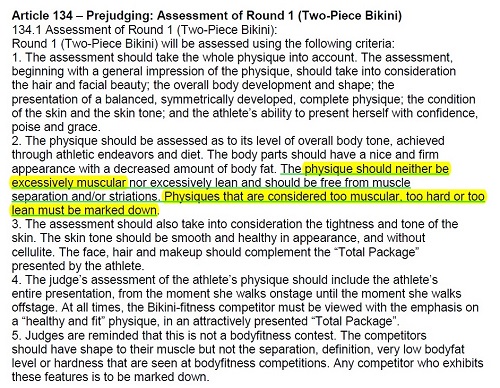 The women’s physique contest made it’s appearance in 2010.  This division is for the women who still want to compete in female bodybuilding, yet don’t want to have to get so muscular to be competitive.  The women’s physique division is somewhat a lighter version of female bodybuilding.  Women’s physique training can be intense to build a solid foundation.  The NPC guidelines express that women can have muscle, but not striated muscle detail.  In the the women’s physique division the lat spread is not a pose.  The side chest pose is with the arms extended and crossed.  The front and back double biceps poses are with open hands rather than clenched fists.  The competitor’s foot must be extended to the side on the front and back poses rather than the flat-footed position.

If you will notice the cycle, each division started off with an intention of allowing women with muscle to compete against one another.  Women trained and dieted to meet their goal and to become the best at their sport.  For that reason, new divisions are constantly coming in because the women become competitive.

To choose with division you would like to compete in take some time and research each.  Also go to a few competitions so you can see the divisions and classes, and how the women actually appear on stage in real life.

So, that’s the difference between figure and physique in competitions.  Ycan check out each division yourself.  Click Here for Each of the Women’s Divisions

Now, take the next step and join over 73,000 other women who are losing fat and getting in shape to compete in everything from Figure to Women’s Physique.  Get my FREE Contest Prep Crash Course and start making changes this week.

Learn More on How You Can Compete

Now, if you want to be one of those competitors, you need to get in on the action.  Grab my FREE contest Prep Crash Course so you can get the real information and the inside advantage.  Click the link below for Instant Access...