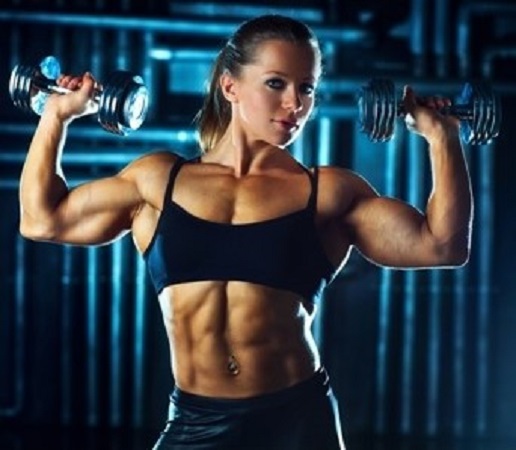 I could tell you about bicep training and bicep workouts, but that would be wrong on my part. First of all, the biceps is one muscle that is composed of two heads; bi – meaning two.  There is no such thing as a bicep exercise or a bicep workout out.  Keep reading to see what I’m talking about…

Keep this in mind when your trainer uses the term “bicep.” If he or she makes reference to:

So, there is no such thing as a bicep exercise or even bicep training for that matter. There IS such a thing as a biceps exercise and biceps training. Why? Because it’s one muscle composed of two heads.

The Basic Structure Of The Biceps

Here’s the rundown. The biceps (the biceps brachii if you need to know the full terminology) makes up 1/3 of the arm size. Again, its one muscle composed of two heads.

How The Bis Are Stimulated in a Biceps Workout

How you train and the order you train your biceps makes all the difference in muscle growth due to how the muscles attach and how the fibers run.

The muscle fibers of the biceps run in one direction. When you train your biceps you either stimulate the biceps (both heads) or you don’t. The shape of your biceps when you develop them comes with:

These may sound like limiting factors, but you CAN localize your biceps workout by recruiting the long head and the short head in a precise manner for better overall development and growth.

So, let’s talk about your biceps workout (yeah, hitting BOTH heads of the biceps) and how to blast your training to the next level to get more development and growth for better symmetrical arms. Hey, you gotta have muscle to step on that competitive stage, girl.

In your biceps workout, to boost your muscle development to the next level and blow away your competition you should train the long head of the biceps first in your training. Generally, for muscle building purposes, it’s good to start your training off with a mass builder (long head) and work down.

The long head of the biceps, also referred to as the outer head, is stimulated when your palms are face up during a curl such as:

The rotation of your hands will shift the emphasis of the muscle stimulation.  Simply by putting a curl that stimulates the long head first in your biceps training it will help build the core foundation better because the long head is responsible for building the overall biceps mass.

The short head of the biceps muscle, also referred to as the inner head, is stimulated more with the rotation of the forearm with such exercises as:

Now this part is going to tick a few people off. But, it is what it is. I really hate that saying. Now, I know you’ve heard about the awesome biceps peak. People slam away at the preacher curls to build their peak.

The problem is a biceps peak is genetic. You can train to build your peak until you are blue in the face, but unless you have the genetics for it to develop, you’ll be left disappointed. You cannot create a peak if you were not blessed with the genetics to build one.

The muscle being targeted on exercises that help to develop the peak is the brachialis, the muscle that lies deep in the upper arm between the biceps and the triceps.

Preacher curls, also known as the Scott Curl, is a popular exercise lifters use to build their biceps peak. However, preacher curls don’t actually build the peak because the fibers run in one direction.

You may feel the “peak” when doing preacher curls because the angle of the curl shortens the long head of the biceps at the shoulder joint. Your biceps are not “peaking,” they are simply scrunched up. Don’t lose hope yet… Keep reading.

Now, if you have been genetically blessed with the potential to build a biceps peak, then training the brachialis with preacher curls will enhance your training so you can boost your peaking development. Cool deal, right?

Good News for Those NOT Genetically Blessed

If you don’t have the body blueprint to build a peak you aren’t out of luck. By building a strong brachialis, it pushes the overlying biceps up! This effect makes the biceps appear larger in general. Cool deal.

So, even if you don’t have the genetics to build a biceps peak, you can use what you have to your advantage.

How to Zone-In to Enhance Peaking

The brachilais is best targeted with curling exercises with the palms facing down and curls where the thumbs are up, as well as the preacher curl.

Some of the exercise that zone in on the brachialis for “peaking’ purposes are:

Genetics (not an exercise)

Now that you know a little bit about the biceps head and about the peak, be sure to train in such a way that helps to build your biceps fully.

Below are some biceps training workouts you can try.

Your first week implement workout #1, your second week use workout #2, the following week hit week #3, and finish off with week #4 and see how your biceps look and feel after this cycle.

Don’t Go With Out This Important Information…

Now…  if you really want to build a killer, and I do mean a hot and sexy body that’s stage ready for a  competition, then you really should check out my FREE Contest Prep Crash Course.  It’s THE guide to take you to the next level.  Take the next step to your best physique by clicking the link below and getting your first lesson…

Get on the Right Course for Your Goal

If you want the real deal information on how to build muscle and get contest ready, you need to grab a copy (FREE) of my Contest Prep Crash Course.  Get in on the trend of fitness...